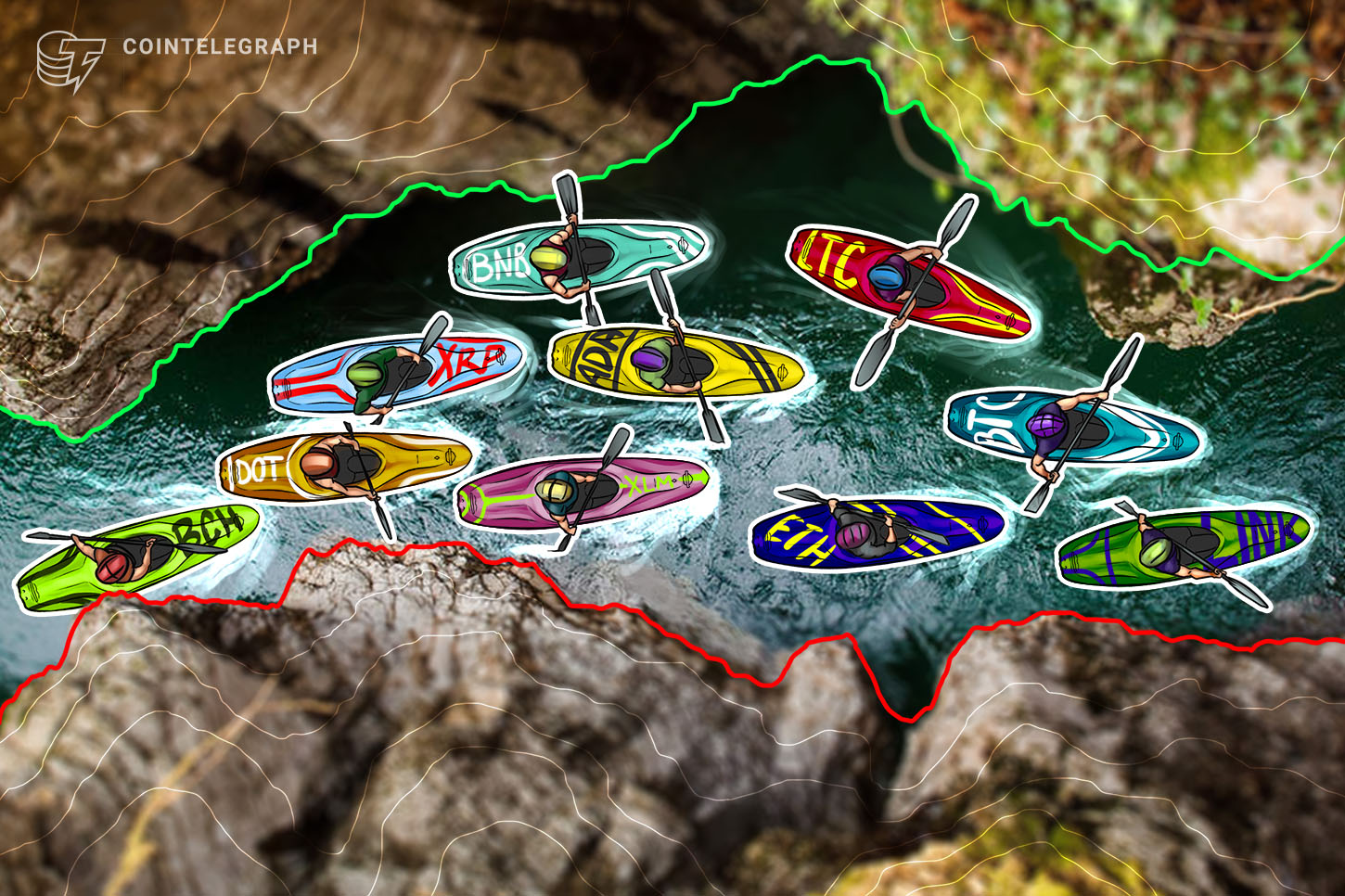 Aggressive buying by institutional investors is one of the main reasons for the current Bitcoin (BTC) bull run. Some investors expressed their intent to hold their positions for a few years, but it is also prudent to note that many of these investors have recently developed a love for Bitcoin and their conviction to HODL may not resemble that of the early Bitcoin whales.

The current bull market could also differ from the last as institutional investors simply cannot hold on to their positions if Bitcoin unexpectedly enters a sharp correction. These fund managers will have to face angry clients if Bitcoin’s performance wanes, thus it’s important to keep a level head when considering the lofty price estimates being thrown out by analysts.

Bitpay’s chief commercial officer Sonny Singh said in an interview with Bloomberg that if Bitcoin’s rally continues, the institutional investors may be tempted to lock in their gains and are unlikely to HODL for the long term.

If that happens, the markets may have to deal with a huge amount of selling, which could result in a sharp fall unless new institutional investors or long-term Bitcoin whales step in and buy.

A few metrics such as rising futures open interest and a high funding rate suggest that traders are taking aggressive bullish bets on Bitcoin’s rally continuing. As has occurred in the past, a sharp downturn in Bitcoin price could result in leveraged players facing a massive long liquidation.

Therefore, it only makes sense that at this juncture, traders exercise caution and use proper money management principles to protect their paper profits.

While Bitcoin’s rally toward $36,000 may have slowed down, several altcoins are skyrocketing. Let’s study the charts of the top-10 cryptocurrencies to determine the possible target levels on the upside.

The long tails on the Jan. 4 and 5 candlesticks suggest that the bears tried to start a correction but the bulls aggressively purchased the dips. Bitcoin has resumed the uptrend today by pushing the price above the previous all-time high at $34,786.04.

However, the relative strength index (RSI) remains in overbought territory indicating the risk of a correction. The first support on the downside is the 20-day exponential moving average ($28,213).

If the pair rebounds off this support, it will suggest that traders continue to buy the dips and that could keep the uptrend intact.

Conversely, if the price breaks below the 20-day EMA, it could result in panic selling that could sink the pair to the 50-day simple moving average ($22,285).

Ether (ETH) has resumed the uptrend today as the bulls have pushed the price above the Jan. 4 intraday high at $1,156.456. However, the RSI above 88 suggests that the biggest altcoin is overbought in the short term.

If the price does not sustain above $1,156.456, the ETH/USD pair could consolidate in a tight range for a few days before attempting the next trending move.

The pair will signal a possible change in trend if the price turns down and plummets below the $840.93 support.

While most major altcoins have been surging, XRP has been languishing near its recent lows, suggesting that traders are not aggressively buying at the current levels.

The consolidation also suggests that the bears are taking it easy. This lack of interest from the bulls and the bears could extend the range-bound action for a few more days.

The next leg of the down move could start if the bears sink the price below the $0.169 support. Such a move could trigger panic selling that may result in a decline to $0.10.

After the large range day on Jan. 4, Litecoin (LTC) formed an inside day candlestick pattern on Jan. 5, which showed indecision among the bulls and the bears. The uncertainty has resolved to the upside and the bulls are currently attempting to resume the uptrend.

However, if the price turns down from $173.3312, then the pair could drop to $140 and remain range-bound between these two levels for a few days.

Cardano (ADA) is currently in a strong uptrend that has a target objective of $0.40. If this level is scaled, the altcoin could even rally to $0.50. However, the sharp rally since Jan. 3 has pushed the RSI deep into the overbought territory.

History suggests that whenever the RSI rises above 80, the ADA/USD pair has witnessed a minor correction or consolidation. Therefore, traders may prepare for a minor pullback in the next few days.

If the bulls do not give up much ground and the pair rebounds off the 38.2% Fibonacci retracement level at $0.2757469, it will suggest that traders are not booking profits in a hurry. The bulls could then attempt to resume the uptrend.

Conversely, if the bears pull the price below the 50% Fibonacci retracement level at $0.2552813, it will suggest aggressive profit booking at higher levels and such a move could deepen the correction or keep the pair range-bound for a few days.

Polkadot (DOT) recovered from $8.70 on Jan. 4, just above the 38.2% Fibonacci retracement level at $8.4507. This shallow correction suggests traders are aggressively buying on every minor dip.

However, if the price turns down from $10.5169, the pair may drop to $8.70 and remain range-bound between these two levels for a few days. A consolidation near the overhead resistance is a positive sign and increases the possibility of the resumption of the uptrend.

This positive view will invalidate if the bears sink the price below $8.70. Such a move could pull the price down to the 20-day EMA ($7.59).

The bulls did not allow Bitcoin Cash (BCH) to plummet back below the $370 breakout level on Jan. 4 and 5. This shows accumulation by traders at lower levels. The bulls are currently attempting to resume the uptrend.

The previous two rallies had reversed direction from the $497 to $515.35 resistance zone. Thus this zone is likely to attract aggressive selling by the bears.

However, if the bulls can absorb the selling and drive the price above $515.35, it may signal the start of a new bull run.

Stellar Lumens (XLM) has picked up momentum in the past three days. The altcoin broke above the descending channel on Jan. 05 and soared today, pushing the price above the $0.35 overhead resistance.

However, the long wick on the day’s candlestick suggests profit booking above $0.35. The bears will now try to pull the price back below $0.2864. If they succeed, the XLM/USD pair may enter a minor correction.

If the bulls can sustain the LINK/USD pair above $16.39, the rally could extend to $20.1111. The bears are likely to defend this resistance aggressively.

However, if the bulls do not give up much ground, the possibility of a break above $20.1111 increases and the next target objective on the upside is $25.

This bullish view will invalidate if the price turns down from the current levels or the overhead resistance and breaks below the $13.28 support. Such a move will suggest a lack of demand at higher levels.

If buyers can drive the price above $43.2039, the BNB/USD pair may resume the uptrend and rally to $50. The upsloping moving averages and the RSI in the overbought territory suggest that the path of least resistance is to the upside.

On the other hand, if the pair again turns down from the overhead resistance level and breaks below $38, it will suggest that the bears have overpowered the bulls. That could result in a correction to $32.

BonqDAO protocol suffers $120M loss after oracle hack
Bitcoin price is up, but BTC mining stocks could remain vulnerable throughout 2023
Bitcoin pro traders warm up the $24K level, suggesting that the current BTC rally has legs
Best January since 2013? 5 things to know in Bitcoin this week
UK regulator investigates charity linked to FTX