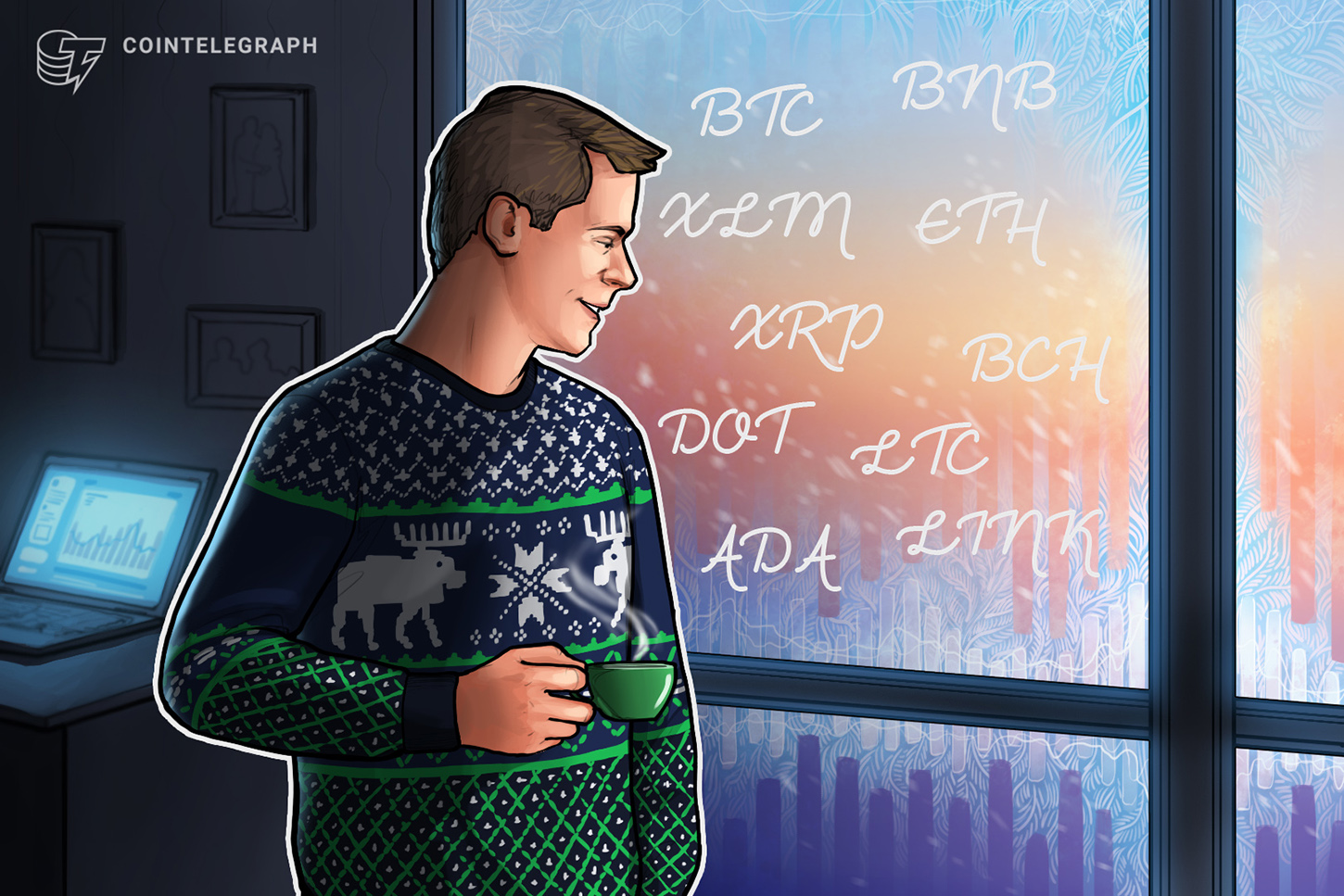 The top 100 richest Bitcoin (BTC) addresses have added 334,000 Bitcoin to their existing holdings over the past 30 days, a clear signal that whales and institutional-size investors bought the dip. A positive sign is that most of them have not reacted to the recent fall in Bitcoin’s price. This suggests that large investors are bullish on Bitcoin for the long term rather than looking to make a quick gain.

An important element in the recent rally is many of the purchases have come from institutional investors who were critical of Bitcoin in the past. The list is likely to get bigger as Oaktree Capital’s co-chairman and co-founder Howard Marks is revisiting his previous “skeptical view” on Bitcoin. In his latest investor memo, Marks said that “thankfully,” his son had purchased a meaningful amount of Bitcoin for the family.

Several institutional investors have been critical of the central banks’ expansionary monetary policies but until now, they primarily used gold to hedge their portfolios. The ones who shifted even a small portion of their gold portfolio into Bitcoin are reaping huge gains.

One such firm, Ruffer Investment had redeployed 2.5% of its Multi-Strategies Fund from gold to Bitcoin in November, and since then, gold has returned a meager 4%, and Bitcoin, even after the recent fall is still up by about 92%.

These outsized gains, even on a small percentage of the portfolio, can easily outperform the peers. To keep up with the competition, institutional investors who may have missed buying earlier could quietly open Bitcoin positions on each new correction.

Many analysts have suggested that institutional investor inflow propelled the current Bitcoin rally and for this reason, traders will be looking out for signals that large investors are buying again.

Let’s analyze the charts of the top-10 cryptocurrencies to find out.

The long tail on the Jan. 11 candlestick shows the bulls aggressively purchased the dip below the 20-day exponential moving average ($32,705). However, the failure of the bulls to resume the uptrend on Jan. 12 shows the bears continue to sell on every minor rally.

The bears want to break and sustain the price below the 20-day EMA while the bulls are attempting to defend it. If the BTC/USD pair does not rebound sharply within the next few days, it may lead to capitulation from buyers and the short-term traders stuck at higher levels.

If the selling intensifies, the BTC/USD pair may break below the 38.2% Fibonacci retracement level at $29,688.10 and fall to the 50-day simple moving average ($24,983). Such a move will suggest the bullish momentum has weakened and that may lead to a few days of range-bound action.

On the other hand, if the pair rebounds off the current levels, the bulls will try to resume the uptrend. The momentum could pick up if the bulls drive the price above $41.959.63.

The bulls aggressively purchased Ether (ETH) during the dip below the 20-day EMA ($982) on Jan. 11 but they could not sustain the recovery on Jan. 12, suggesting that demand dries up at higher levels.

However, the positive sign is that the bulls again bought the dip to the 20-day EMA today. The buyers will now try to push the price above $1,150 and if they succeed, the ETH/USD pair may rise to $1,300. A breakout of this resistance may resume the uptrend.

On the contrary, if the pair turns down and breaks below the 20-day EMA, the decline could extend to $840.93 and then to the 50-day SMA ($732). A break below this support will signal that the bears are back in the game.

XRP is currently range-bound in a downtrend. The price is oscillating between $0.169 and $0.384998. The flat 20-day EMA ($0.30) and the relative strength index (RSI) just below the midpoint, suggest a balance between supply and demand.

If the bulls can push the price above the 20-day EMA, the XRP/USD pair may rise to $0.384998. A breakout and close above this level will form an inverse head and shoulders pattern, indicating a possible reversal.

Conversely, if the price turns down from the current levels or the overhead resistance, then the pair may remain range-bound for a few more days. A break below $0.169 could resume the downtrend.

The long tail on today’s candlestick suggests buying at lower levels. The bulls will once again try to push and sustain the price above the 20-day EMA. If they succeed, the LTC/USD pair may move up to $160 and then to $180.

However, if the bears successfully defend the 20-day EMA, the pair may trade between the moving averages for a few days. The flat moving averages and the RSI near the midpoint also suggest a balance between supply and demand.

Cardano’s (ADA) strong rebound off the 20-day EMA ($0.247) on Jan. 11 suggests the sentiment remains bullish as traders are buying on dips. But the long wick on the Jan. 12 candlestick suggests the bears are unlikely to give up without a fight.

Today’s inside day candlestick pattern suggests indecision about the next directional move. However, the upsloping moving averages and the RSI in positive territory suggest the path of least resistance is to the upside.

This bullish view will invalidate if the pair turns down from the current levels or the overhead resistance and breaks below the 20-day EMA. Such a move could pull the price down to the 50-day SMA ($0.186).

Bitcoin Cash (BCH) rebounded from just below the 20-day EMA ($427) on Jan. 11 but the bulls could not sustain the recovery and push the price back above $515.35 on Jan. 12, indicating selling at higher levels.

Conversely, if the up-move turns down from $515.35, the pair may drop to the 20-day EMA and remain range-bound between these two levels for the next few days.

Polkadot (DOT) completed a successful retest of the breakout level on Jan. 11 when it rebounded sharply from $7.1642. The sharp recovery from the intraday lows carried the price back above the 20-day EMA ($8.39), which is a positive sign.

The DOT/USD pair formed an inside day Doji candlestick pattern on Jan. 12, indicating indecision about the next directional move. This uncertainty resolved to the upside today and the bulls are currently attempting to resume the uptrend.

The up-move may face resistance in the $10 to $10.68 resistance zone, but if the bulls can thrust the price above it, the pair could rally to $12.50. Conversely, if the price turns down from the overhead resistance, the pair may consolidate near the highs for a few days.

The long tail on the Jan. 11 candlestick shows the bulls aggressively purchased the drop to the 20-day EMA ($0.23). Stellar Lumens (XLM) attempted to extend the recovery on Jan. 12 but the long wick on the day’s candlestick shows profit booking at higher levels.

The bulls are currently trying to sustain the price above $0.2864. If they are able to do that, the XLM/USD pair may move up to $0.35 where it is likely to hit a roadblock.

If the price turns down from this resistance, a few days of range-bound action between $0.35 and $0.25 is possible.

On the contrary, if the price fails to sustain above $0.2864, the pair may retest the 20-day EMA. A break below this support could tilt the advantage in favor of the bears.

Chainlink (LINK) had dipped below the 50-day SMA ($13.21) on Jan. 11 but the bears could not capitalize on this weakness, resulting in a strong rebound. Today again, the altcoin has bounced off the 50-day SMA, suggesting strong buying at this support.

If the bulls push the price above $15.50, the LINK/USD pair may rise to $17.7777 where it is likely to face stiff resistance from the bulls.

The flat moving averages and the RSI just above the midpoint suggest a balance between supply and demand.

If the price turns down from $15.50, the pair may consolidate in a tight range for a few days. The trend will turn in favor of the bears if the price breaks below the uptrend line.

Binance Coin (BNB) bounced off the $35.69 support on Jan. 11, indicating accumulation at lower levels. However, the bulls could not build up on the recovery on Jan. 12 and the altcoin formed a Doji candlestick pattern, suggesting indecision between the bulls and the bears.

The buyers are currently trying to push the price back above the 20-day EMA ($38.74). If they succeed the BNB/USD pair could move up to the 50% Fibonacci retracement of the most recent leg of the fall at $40.0997.

However, the flat 20-day EMA and the RSI just above the midpoint suggest a possible range-bound action in the near term. The trend could turn in favor of the bears if the pair slips below $35.0374.

Why is crypto pumping? Watch The Market Report live
The legal dangers of getting involved with DAOs
Bitcoin ‘so bullish’ at $23K as analyst reveals new BTC price metrics
Elon Musk’s Tesla held onto its Bitcoin in Q4 despite market turbulence
3 reasons why the MANA and SAND metaverse token rally could end soon