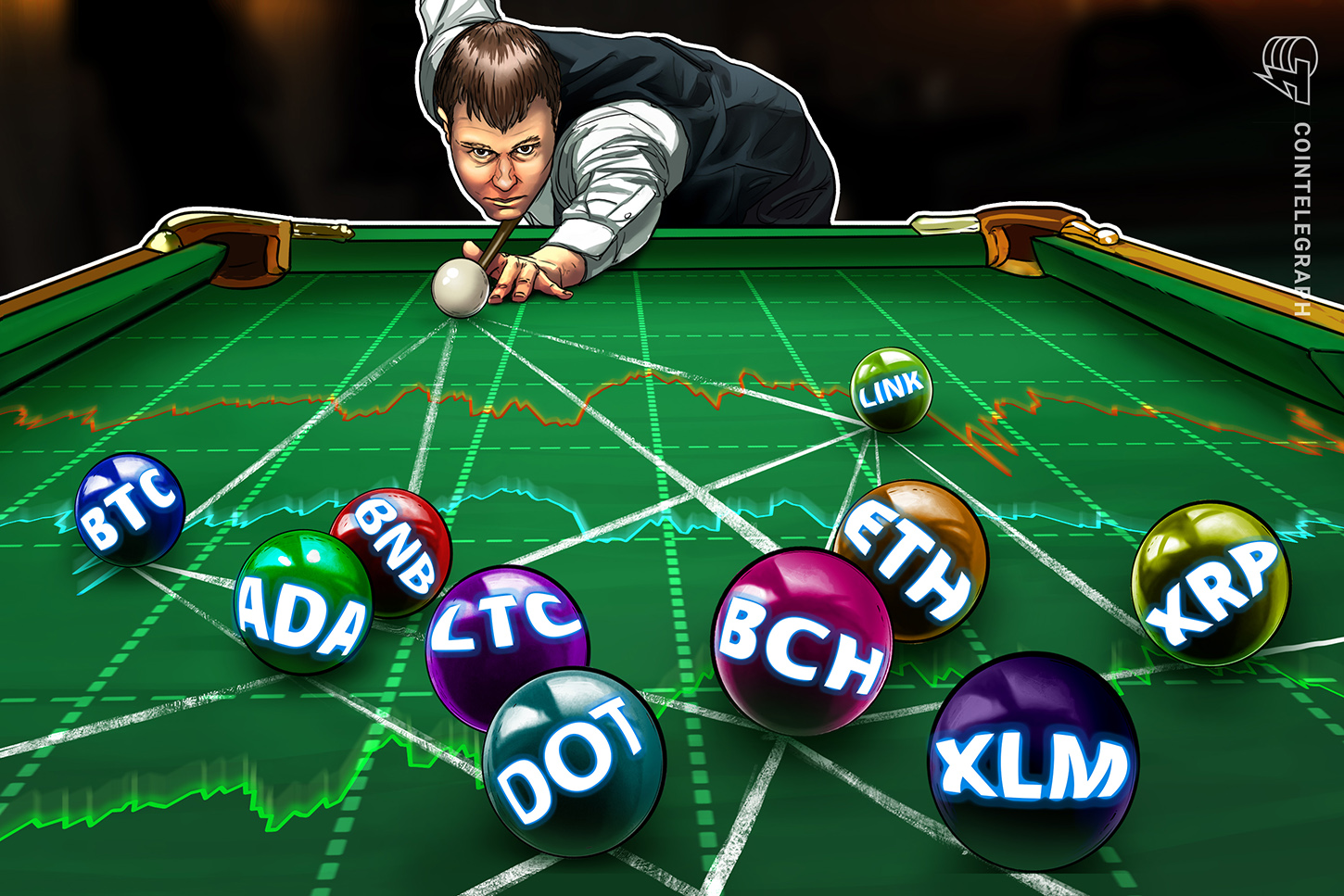 Grayscale products witnessed $3.3 billion in inflows in the fourth quarter of 2020, a large jump over the $1.05 billion seen in the preceding quarter. According to Grayscale, institutional investors accounted for 93% of the new investments.

The significance and magnitude of the investments can be gauged from the fact that in 20, Grayscale received $5.7 billion in investments, which is four times the cumulative inflow between 2013 and 2019

Data from Glassnode also shows that since July 2020, only about one-third of the 900 Bitcoin (BTC) mined each day have made their way to exchanges. During that period, Grayscale alone purchased about 1,200 Bitcoin every day. This shows how demand exceeded supply by a huge margin, resulting in the sharp rally which was ignited in the latter half of 2020.

However, after Bitcoin’s recent rise, larger inflows are needed to sustain the momentum. If this does not happen, select investors may be tempted to lock in their gains and that could start a correction with speculators and short-term traders rushing to the exit.

Let’s analyze the charts of the top-10 cryptocurrencies to determine the path of least resistance.

Bitcoin’s recovery hit a barrier at $40,0129 on Jan. 14 and the price has again turned down today. The bulls are currently attempting to defend the 20-day exponential moving average at $33,795.

The price action of the past few days has formed a symmetrical triangle, which generally acts as a continuation pattern. If the bulls can drive the price above the triangle, the uptrend could resume. The pattern target of the setup is $52,000.

On the other hand, if the bears sink the price below the triangle, the selling could intensify and the BTC/USD pair may drop to the 50-day simple moving average at $25,826. Even if the price falls to this level, the uptrend will not be broken.

Lower levels are likely to attract fresh buying from traders and that could result in a few days of consolidation where the bulls gradually accumulate before starting the next leg of the uptrend.

The upsloping moving averages and the relative strength index (RSI) in the positive territory suggest that bulls are in command. If the buyers can propel the price above the $1,258.30 to $1,349.10 overhead resistance zone, the ETH/USD pair could rally to $1,462.

However, if the bulls fail to push the price above the overhead resistance zone, it may attract profit-booking from short-term traders and that could pull the price below the 20-day EMA. If that happens, the pair may drop to the critical support at $840.93.

The bulls could not push XRP above the 20-day EMA ($0.30) in the past four days, suggesting bears are defending this resistance. If the sellers can sink the price below $0.25, the altcoin could drop to $0.169.

A strong rebound off $0.169 will suggest that the bulls are accumulating at lower levels. If the buyers can then push the price above the 20-day EMA, the XRP/USD pair may extend its stay inside the $0.169 to $0.385 range for a few more days.

This view of a range-bound action will invalidate if the bears break the $0.169 support. Below this level, the downtrend could resume with the next target objective at $0.10.

Polkadot (DOT) surged to a new high on Jan. 13 and followed it up with another strong rally on Jan. 14. The altcoin is currently facing resistance near $15 but the shallow correction suggests traders are not booking profits in a hurry.

On the contrary, if the bears sink and sustain the price below $11.9819, the pair could drop to the 61.8% retracement level at $10.1422. A deep correction will suggest the momentum has weakened and that could keep the pair range-bound for a few days.

Cardano (ADA) rose above the downtrend line today but the bulls could not sustain the breakout, which suggests profit-booking at higher levels. The bears will now try to sink the altcoin to the 20-day EMA ($0.259).

The rising moving averages and the RSI in the positive territory indicate bulls have the upper hand. If the ADA/USD pair rebounds off the 20-day EMA, the bulls will attempt to push the price above the downtrend line and resume the uptrend.

A break above $0.3542857 could push the price to $0.40 where the rally may again hit a roadblock. This bullish view will invalidate if the price turns down from the current levels and breaks below the 20-day EMA. Such a move could pull the price to the 50-day SMA ($0.192).

After a deep correction, the price usually consolidates in a range for a few days before starting the next trending move. The flat 20-day EMA ($143) and the RSI just above the midpoint suggest a balance between supply and demand.

Contrary to this assumption, if the pair rebounds off the current levels, the bulls will try to push the price to $185.5821. A break above this resistance could resume the uptrend.

Bitcoin Cash (BCH) rose above the $515.35 overhead resistance on Jan. 14 but the bulls could not sustain the breakout, which shows that bears are active at higher levels. The sellers are currently attempting to sink the price below the 20-day EMA ($443) and the uptrend line.

If they manage to do that, the BCH/USD pair could drop to $370. This level is likely to act as a strong support and a rebound could keep the price between $370 and $515.35 for a few days.

Contrary to this assumption, if the bulls can build up on the rebound off the 20-day EMA, a rise above $515.35 is likely. Such a move could increase the possibility of a rally to $600. The upsloping moving averages and the RSI in the positive territory suggest advantage to the bulls.

Chainlink (LINK) rallied for the past two days and closed above $17.7777 on Jan. 14, indicating strong demand at lower levels. The bulls continued their purchase today and drove the price to a new high at $21.4533.

However, the long wick on today’s candlestick suggests profit booking at higher levels. If the bulls do not allow the price to dip back below $17.7777, it will suggest buying on dips.

However, the bears are unlikely to give up easily. They are currently attempting to sink the price back below $17.7777. If they succeed, the pair could drop to the 20-day EMA.

Stellar Lumens (XLM) broke above $0.2864 on Jan. 13 but the Doji candlestick pattern on Jan. 14 suggested indecision among the bulls and the bears. The uncertainty has resolved to the downside today and the bears are currently trying to sustain the price below $0.2864.

If they manage to do that, the XLM/USD pair may drop to the 20-day EMA ($0.24). A strong rebound off this level will suggest that traders continue to accumulate at lower levels. The upsloping moving averages and the RSI in the positive zone suggest bulls have the upper hand.

Contrary to this assumption, if the price turns up from the current level and rises above $0.32, the pair could rally to $0.35. The bears are likely to mount a stiff resistance at this level but if the bulls can push the price above it, the rally could extend to $0.409 and then to $0.50.

Binance Coin (BNB) broke above the 20-day EMA ($39) on Jan. 13, indicating that the selling pressure had reduced. However, the bears are unwilling to give up without a fight and they are selling above $42.

If the bears can sink and sustain the price below the 20-day EMA, the BNB/USD pair may drop to the $35.69 support. A bounce off it could keep the pair range-bound between $35.69 and $43 for a few days as both the bulls and the bears try to establish their supremacy.

Contrary to this assumption, if the pair rises from the current levels, the bulls will make one more attempt to push the price to $45.1620. If they succeed, the pair may reach $50.