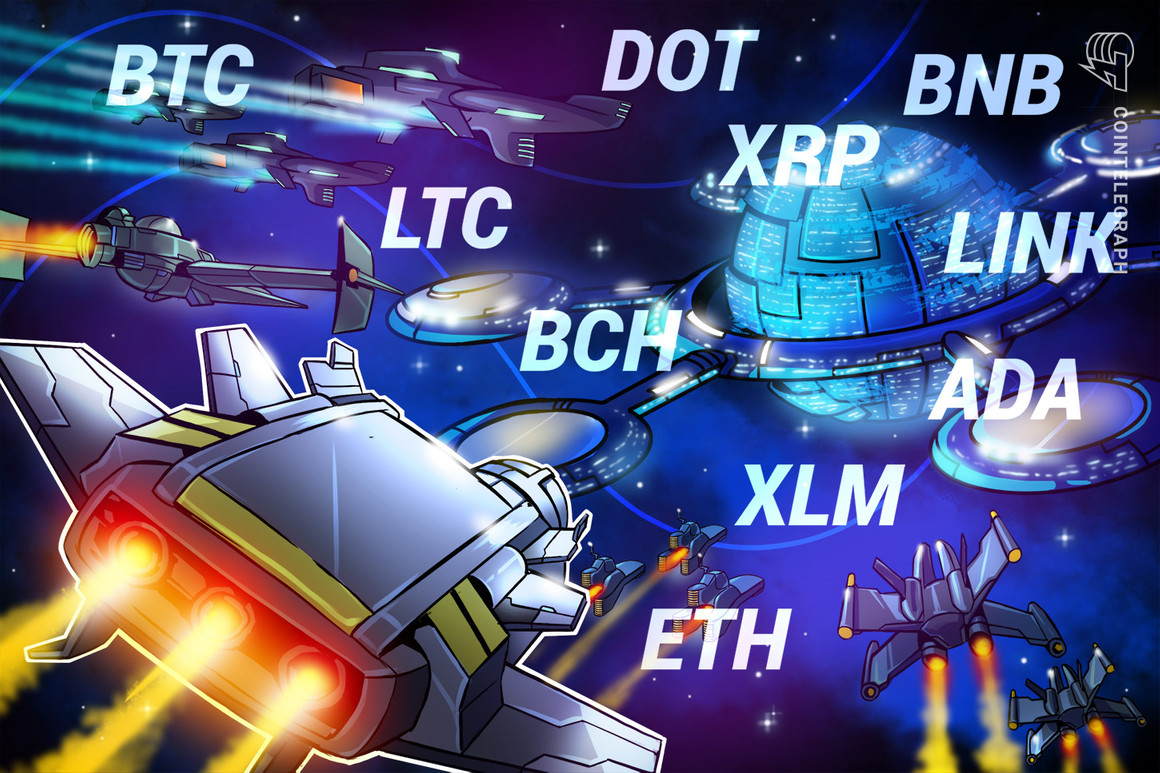 Public companies have purchased about 85,000 Bitcoin (BTC) in the past year and institutional investors have pumped money into Grayscale Investments, which shows increasing institutional adoption is one of the main reasons for the recent Bitcoin rally.

However, at the moment it seems institutional investors are unlikely to chase prices higher. If the fresh inflow of money stalls or reduces drastically, it could result in a pullback in Bitcoin’s price. If that happens, short-term traders and momentum players may book profits and trigger a deeper correction.

A correction will be a healthy sign because it will shake out the speculators and only the long-term HODLers will be left in the market. As the price dips, additional institutional investors may start buying at lower levels. The transfer of Bitcoin’s ownership from speculators to long-term investors will be positive in the long term.

If Bitcoin enters a deeper correction in the short term, several altcoins are likely to follow suit.

Let’s study the charts of the top-10 cryptocurrencies to determine the support levels where buyers may step in.

The BTC/USD pair has resumed its correction today, which shows the bulls are not able to absorb the supply. The downsloping 20-day EMA and the relative strength index (RSI) in the negative zone suggest bears are in control.

This bearish view will invalidate if the price rebounds off the current level and breaks above the downtrend line. If that happens, the pair may rally to $40,000 and then to $41,959.63.

Ether’s (ETH) inability to sustain above $1,400 on Jan. 25 shows the bears were booking profits at higher levels. The bulls again attempted to regroup on Jan. 26 but the altcoin has turned down today, which suggests traders may be closing their long positions.

The negative divergence on the RSI shows the momentum has weakened. If the bears can pull the price below the 20-day EMA ($1,211), a retest of the uptrend line is likely. This is an important support to watch out for because a break below it will signal a possible trend change. The next support on the downside is the 50-day SMA ($928).

On the other hand, if the bulls can sustain the current rebound, it will suggest that the bulls are buying on dips. If the bulls can push the ETH/USD pair above the $1,400 to $1,473.096 resistance zone, the uptrend could resume with the next target objective at $1,675.

Polkadot (DOT) turned down from the overhead resistance on Jan. 25 and dropped to the $14.7259 support today. The bulls are likely to defend this support aggressively.

A strong rebound off $14.7259 will suggest traders are accumulating on dips. That could keep the DOT/USD pair range-bound between $14.7259 and $19.40 for a few more days. The gradually rising 20-day EMA and the RSI in the positive territory suggest the bulls have a minor advantage.

On the contrary, if the bears sink the price below $14.7259, the decline may extend to the 50% Fibonacci retracement level at $13.2821 and then to the 61.8% retracement at $11.8383. A deeper correction will suggest the uptrend has lost momentum and that may result in a few days of consolidation before the next trending move starts.

After defending the 20-day EMA ($0.28) for the past few days, the bears are currently attempting to sink XRP below the $0.245 support. The downsloping moving averages and the RSI in the negative territory suggest the path of least resistance is to the downside.

A break below $0.245 will increase the possibility for a fall to the next critical support at $0.17351. If this support also cracks, the XRP/USD pair could resume the downtrend with the next possible stop at $0.10.

On the contrary, if the pair rebounds off the current level, the bulls will again try to push the price above the downtrend line. If they manage to do that, the pair could remain range-bound between $0.245 and $0.3855 for a few more days.

The bulls are currently defending the support line of the ascending channel. A strong bounce off this level will suggest the bulls are buying on dips. The bulls will then try to push the price above the downtrend line, which will be the first indication that the correction may be over.

If the price sustains above the downtrend line, a retest of $0.3971995 could be on the cards. Conversely, if the bears sink the price below the support line, it will suggest a possible trend change that could result in a drop to the 50-day SMA ($0.23).

Chainlink (LINK) is currently witnessing a correction in an uptrend. The first critical support to watch on the downside is the 20-day EMA ($20.15), which is near the breakout level at $20.1111.

A strong rebound off this support will indicate the bulls are aggressively accumulating at lower levels. They will then try to resume the uptrend by pushing the price above the recent all-time high at $25.7824.

Contrary to this assumption, if the bears sink the price below the 20-day EMA, the LINK/USD pair could drop to $17.7777. A break below this support will suggest a change in trend and may pull the price down to the 50-day SMA ($15.58).

Renewed selling has dragged the LTC/USD pair below the 50-day SMA today and the bears will now try to break the $120 support. If they manage to do that, the pair will complete a bearish head and shoulders pattern that may result in a fall to $100 and then to $70.

The downsloping 20-day EMA and the RSI in the negative zone suggest the path of least resistance is to the downside. This negative view will be negated if the pair rebounds off the $120 support and rises above $148.

Bitcoin Cash (BCH) failed to sustain above the 20-day EMA ($443) on Jan. 25 and that could have attracted selling from the bears who have dragged the price below the 50-day SMA ($389) today.

The downsloping 20-day EMA and the RSI in the negative territory suggest the path of least resistance is to the downside. A break below the $370 support could pull the price down to $353 and if that level also cracks, the next stop may be $275.

This bearish view will invalidate if the BCH/USD pair bounces off the current level or the $353 support and rises above $450.

Binance Coin (BNB) could not sustain above $43.0992 on Jan. 25, indicating a lack of buyers at higher levels. The altcoin formed a Doji candlestick pattern on Jan. 25 and 26, which showed indecision among the bulls and the bears.

The sellers are attempting to gain the upper hand by sinking the price below the support line of the ascending broadening wedge pattern. If they succeed, the BNB/USD pair may drop to $35.69 and then to $30.

Contrary to this assumption, if the bulls can defend the support line, it will suggest demand at lower levels. The bulls will then again try to push the price above $43.0992. If they can manage to do that, the pair may rise to $47.2187.

The flattish 20-day EMA ($40.99) and the RSI close to the midpoint does not give a clear advantage to either the bulls or the bears.

The failure of the bulls to push Stellar Lumens (XLM) above $0.282 may have attracted profit-booking from short-term traders who had purchased the dip on Jan. 22. The altcoin turned down and broke below the 20-day EMA ($0.261) on Jan. 25.

When the price fails to build up momentum above the 20-day EMA, it shows a change in sentiment. The current fall indicates the traders used the recent relief rally to lighten their positions.

The XLM/USD pair can now drop to the 50-day SMA ($0.214), which may attract some dip buying. But if the pair fails to rebound off this support with strength, the correction could deepen, and a fall to $0.19 and then to $0.15 may be on the cards.