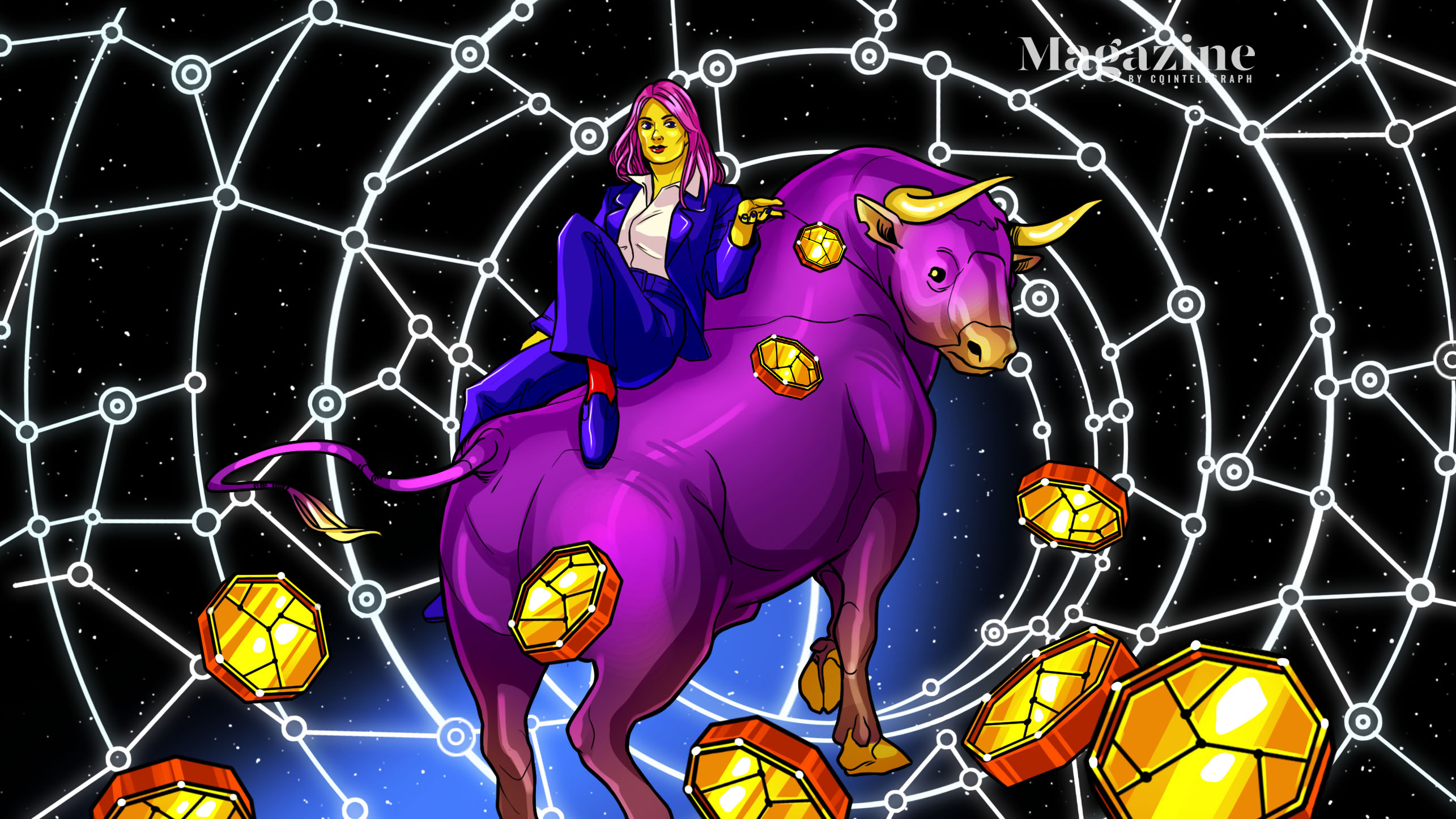 European Parliamentarian Eva Kaili’s conversion to cryptocurrency came as she watched her friends lose their life savings in the fallout of the Global Financial Crisis. The crunch came during the 2012 Cypriot financial crisis, when Cypriot banks collapsed and a levy was imposed on many depositors to fund the resulting bailout.

“Lots of my friends lost their savings because banks suddenly shut down and nobody would guarantee their life savings,” she says. “So this was like quite a shock.”

“And then I thought okay, so if this system couldn’t protect us… we cannot restore trust, we have to have alternatives so that the system itself will start improving the options of the citizens, and so I started exploring decentralization”

Today, Kaili is among the most outspoken proponents for cryptocurrency adoption and blockchain technology on the European political stage.

Birth of a Bitcoiner

An architect by training, Kaili became a popular newscaster for Mega Channel before being elected to the Greek Parliament in 2007 for the Panhellenic Socialist Movement party at just 29. “They were telling me it’s impossible for a young person to participate. I said okay, let’s see if that’s true… and it seems that if citizens have more [candidate] choices, they’re actually quite daring,” she says.

The Greek sovereign debt crisis saw the economy collapse in the months following her election, making it the perfect time for a daring politician to step up. The crises also tested Kaili’s own convictions. “You couldn’t be naive, you couldn’t be romantic or idealistic, you had to find solutions and start to explore all the possibilities I had as a politician. I was trying to think out of the box.”

Kaili thought of decentralization as a possible solution, having been introduced to the concept of peer-to-peer networks while using uTorrent to pirate files with her friends back in Aristotle University. Torrents seemed “like a miracle” she says. Why couldn’t value be exchanged in a similar way?

Watching YouTube videos about these emerging technologies, Eva began to understand Bitcoin. It was the out-of-the-box solution she had been searching for, and it just clicked. Indeed, there were many Cyrpriots looking for alternatives to the legacy financial system that year. Producer Zhou Tonged released a music video in 2014 set to the tune of Swedish House Mafia, that summed up the feelings of many of their compatriots.

There was a time, I thought my government was doing right

But they crossed the line, and now I’m fighting for my f–king life

Laiki [bank] took my funds, and now I think how this all will end

My money’s with Bitcoin, ’cuz what they’ve done they can never mend

Just when the Cypriots were losing faith

That’s when I learned about the Blockchain

I still remember how it all changed

Voting on the blockchain

Kaili has been a Member of the European Parliament since 2014. She says blockchain voting is one immediate application by which the bloc could save 90% on election costs while protecting against vote fraud. She recounts the first month of the COVID-19 lockdown, during which she says the EU parliament was unable to develop proper legislation and MEP’s stuck at home had to print out their voting forms before physically signing, scanning, and emailing them back.

Kaili is confident that blockchain voting offers benefits beyond mere cost savings, as “you can actually see the participation in a live way” with biometric controls potentially used to ensure security. Appropriately enough for a virus ravaged world, anyone could vote from their mobile devices without needing to attend a physical voting center. The ease of this system, she believes, would expand voter participation and thus strengthen the democratic process.

Europe as a blockchain hub

Kaili, who belongs to the center-left European Progressive Alliance of Socialists and Democrats, is far from a crypto-anarchist or cyber-libertarian. She has no ideological desire to give up the currency monopoly per se, but rather feels that the current monetary system is not yet mature enough to protect people. It’s because she saw the Euro system fail, setting her country back by a decade with a spiral of austerity, that she believes alternatives are needed.

For Kaili, the purpose of Bitcoin and blockchain technology is not to violently overthrow and burn down an economic or political system by way of revolution. Instead, they are tools by which to strengthen and improve the system by promoting trust, stability, and efficiency.

“Blockchain is the definition of a trusted environment.”

The biggest advantages that Europe can offer to blockchain startups, according to Kaili, is legal certainty and increasing standardization across the single market. She sees Europe’s general approach to cryptocurrencies as less adversarial than the United State’s, where entrepreneurs can sometimes find themselves “in a really complicated situation with the SEC” despite good-faith efforts.

Not everyone in the EU is as willing as Kaili to embrace financial innovation. In December 2020, the German Finance Minister Olaf Scholz declared Facebook’s stablecoin project Libra, now called Diem, “a wolf in sheep’s clothing …  we must do everything possible to make sure the currency monopoly remains in the hands of states.”

While she wants to provide more choices, Kaili also worries that large foreign companies, or undemocratic regimes, could become the issuers of a global currency. To her, this would be unacceptable because Europeans would lose even more control of their personal transaction data:

“You have the big platforms; most of them are not based in the EU. You have Facebook, Google, Amazon, Alipay, Alibaba, all of them having access to European data, manipulating your perceptions, micro-targeting you,” she says, adding that appropriate regulation of digital currencies would be required to ensure that those mistakes aren’t repeated.

“We are forced to regulate the internet for the European citizens to make sure the fundamental principles of Europe and the rights of people will be protected.”

This means that Europe needs to issue better money than competing technology giants, one reason Kaili is a big supporter of a European Digital Currency. She envisions something much bigger than a simple re-creation of the Euro on a digital ledger.

Kaili says the best way to bring about financial innovation is by designing “appropriate legislation”. She has been pushing for the creation of hybrid legislative sandboxes to allow for the development of blockchain products.

Soon, this will allow people to invest in companies through tokens, issued by startups and medium sized businesses to access liquidity.

“We should keep, of course, having a monetary system that is there to balance systemic risks from crises; to do crisis management, but we also have to explore innovative solutions […] We have to be able to create new laws for these new technologies.”

So how do the other politicians and bureaucrats at the EU level feel about all of this? Kaili laughs, revealing both humor and frustration.

“Okay so blockchain in general, everybody is positive. When it comes to currencies, everybody is skeptical.” She says this is due largely to a lack of knowledge and understanding on the subject. Very few of her colleagues, Kaili believes, could even explain what an algorithm is. “We should understand that the world is changing […] it’s an unstoppable technology”

A financial system for the future

This talk of unstoppable technology brings up the question of whether Kaili is worried about cryptocurrencies being used to evade taxes. After all she believes in governments taking care of their people, and that requires a tax base.

She laughs again and says, with a hint of irony:

“Elias between me and you, I think the best way to get the ones that want to tax-evade is to put them on blockchain, because nothing is ever gone forever.”

She adds: “I understand there are decentralized coins and then there are actually ways to trick and fool the system, but you can do that with cash, you can do that with Euro.” She believes that blockchain could enable all financial transactions and investment activity to be tracked in real-time in such a way that the appropriate taxes are applied automatically despite the complexities of a multi-country tax system. In essence, Kaili envisions a financial ecosystem and network where taxes are simply built-in, in a way not dissimilar to the way transaction fees work in the Bitcoin and Ethereum networks, respectively.

“Of course, we have to be careful to not overdo it, but I think it could give an opportunity for the government to have the final say in the end of your profits or transactions, without trying to ‘get you’,” she says.

Automatic taxation could result in astronomical savings across the economy when accounting for all the time and effort that individuals and companies now expend on preparing and handling taxes.

This vision is in line with Kaili’s greater political agenda of Pro-Europeanism, which aims to further integrate and harmonize Europe in order to build what some have called a ‘United States of Europe’.

Whether one finds this vision utopian or dystopian, there is no question that Kaili is an ambitious and future-oriented thinker with serious political weight.

Kaili has especially strong support from young voters, many of who have become cynical of governments and the digital world. Blockchain, however, excites them.

“We all realize we need to trust the system again, or at least use the technologies […] So, I have the feeling that it’s the interest of the young generations to be able to trust the internet again.”

A big part of that is putting users back in control of their own data, Kaili explains. Users of online services should be able to grant and remove data-sharing permissions at will, receiving some online goods in exchange for sharing specific data-points which the end-user is always conscious of, and in control of. By building the future on blockchain, this could become reality.

“The foundation of the EU, is to respect your rights, and one of the main rights here is the right to privacy.” Privacy and safety, Kaili says, are two equal pillars which European leaders are not willing to compromise.

I end on a personal note, telling Kaili how, after living on four continents, I do find that it is indeed the EU which takes the most active steps in promoting individual citizen’s rights and well being in the online world. Europe represents a sort of dynamic middle way in an increasingly polarizing world, which is a big part of why I choose to spend my time here now. She seems pleased:

“I think this is an example of how I see things, and why I believe in Europe so much.”