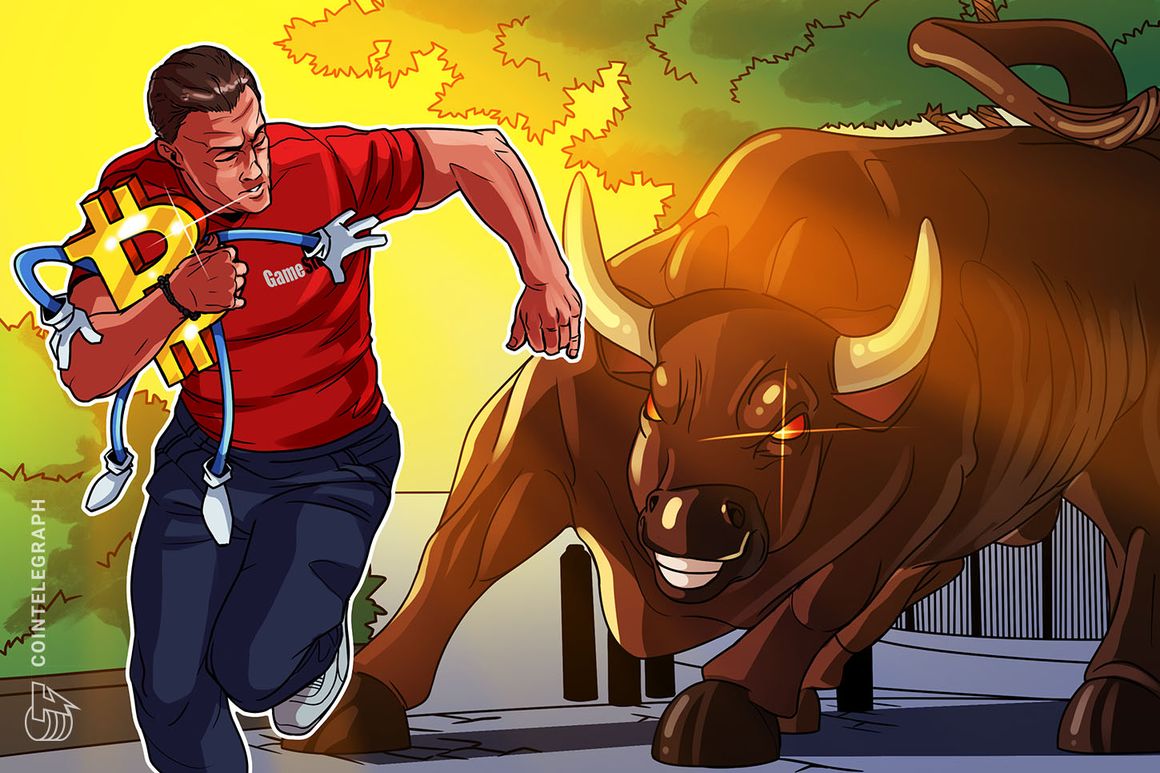 Was last week’s Reddit versus Wall Street stand-off really the “beginning of the end for centralized finance,” as Gemini founder Tyler Winklevoss described it? Or was it just a one-time instance of individuals coming together to right a perceived wrong — with no long-term economic consequences?

As GameStop, a struggling videogame retailer, came under attack by hedge-fund short sellers, a coalition of individuals spearheaded by r/Wallstreetbets, a Reddit forum, jumped in to save GameStop by buying its shares, driving its stock price from $20 to as high as $483 — and doing some real damage to short traders in the bargain.

But then Robinhood, the insurgents’ trading platform of choice, suspended purchases of GameStop’s GME stock and seven other stocks. The Redditors cried foul, asserting that Robinhood had caved in to the hedge funds and other entrenched Wall Street interests. Robinhood, for its part, explained that it was forced to suspend GME purchases or it would have run out of cash to cover the transactions.

However, more than 30 class-action lawsuits were filed against the centralized trading platform — one complaint arguing that the suspension was just what “the [GME-shorting] hedge funds wanted,” and another even declaring that “Robinhood stole from the poor to give to the rich.”

Others implied that this sort of chicanery wouldn’t have occurred in a decentralized financial world. Along those lines, Galaxy Digital’s Mike Novogratz called the GME flare-up a “giant endorsement of DEFI,” and one crypto user, who wanted to remain anonymous, told Cointelegraph: “Restricting individuals from buying a selected stock is a form of a centralized control mechanism. In a decentralized trading market, no one would have that power.”

This view wasn’t unanimous, though. Quantum Economics co-founder Mati Greenspan found little to applaud in the crowd-sourced purchasing of GameStop stock: “The narrative that Main Street was finally able to beat Wall Street at its own game is extremely misguided,” as according to him, “there were hedge funds on both sides of this trade.” He went on to add: “It’s hard to see how buying overpriced shares of a company that’s losing money will make the world a better place.”

With that as a backdrop, here’s a deeper dive into what lessons, if any, could be drawn from the r/Wallstreetbets vs. the suits showdown. For instance, if retail investors can now move stock prices, then surely they can move large-cap cryptocurrency prices, no?

Is the writing on the wall?

“The events around GME and Robinhood were a wakeup call for the broader public,” Alexei Zamyatin, co-founder and CEO at Interlay — a research and development company focusing on blockchain interoperability — told Cointelegraph, adding: “I doubt most people outside of finance/banking were aware that Robinhood’s main customers were hedge funds rather than retail users.”

“I’m not entirely sure I agree that the recent GME saga has proven that retail investors can meaningfully coordinate to move stocks in the long run,” George Giaglis, executive director at the Institute for the Future at the University of Nicosia, told Cointelegraph. “I see this more as evidence of late-stage market-topping rather than a new wave of sustainable retail-driven market domination as many commenters would like to portray it,” he added.

Kaj Burchardi, head of BCG Platinion Netherlands — a division of Boston Consulting Group — told Cointelegraph: “In theory, a joint retail crowd can move many assets,” including crypto prices — but of course, that depends on the size of the crowd. The Reddit r/Wallstreetbets forum reportedly mobilized thousands of individual investors to purchase GameStop shares. “Overall, I think the number of retail investors will grow in the crypto space — independent if they join forces similar to the GameStop example,” said Burchardi.

“Their risk tolerance has been higher, and the crypto narrative appeals more to individuals looking for a new system. DeFi put retail and institutional capital on level footing last year, which will be a key aspect to watch going forward.”

But what about the respective parties in last week’s scrap. Dallas Mavericks’ owner Mark Cuban suggested that “the old-school investment community is currently taking a kicking from what he describes as the ‘Store of Value Generation.’” Is it indeed a conflict between the young and old?

According to Sokolin: “We saw not just a generational struggle but a philosophical one.” Furthermore, as the information gap has now shrunk, internet-native investors are now more capable of rivaling professional investors: “They can self-organize and vote with their money, which, in aggregate, can rival the billions in high finance.” William Knottenbelt, a professor at Imperial College London’s department of computing, told Cointelegraph:

“The struggle is neither between younger and older generations nor between ordinary people and hedge funds. It is more between those who believe in the protection and expansion of the personal freedoms of individuals — including the right to engage in financial markets — and those who do not.”

Along these lines, “DeFi shows strong potential when it comes to protecting and enhancing certain freedoms,” continued Knottenbelt, “but it is not immune to some kinds of ethically dubious activities that also manifest in more centralized systems.”

Meanwhile, according to Burchardi, “it is a centralized vs. decentralized struggle,” which may correlate with age, but not necessarily. “For instance, in just one year, we saw the value of DeFi move from close to zero to $25 billion-plus of locked capital. This growth is decentralized and often community-driven.”

A win for social media?

If individual investors didn’t demonstrate their clout conclusively, then what about social media? Did platforms like Reddit serve notice that they are now a force with which to be reckoned in the financial realm? Sokolin told Cointelegraph: “We witnessed the power of social media, and powerful emotions tip over the financial games of the past. Crypto already embodies this ethos, as many assets are valued by the community, not by analysts.”

Mati Greenspan, writing in his newsletter, agreed: “One lesson that the world seems to have learned is that social media can be a leading indicator, and even a driving force, for future price movements.”

As for decentralized finance, did it get a boost from the outcry when Robinhood suspended buying of GME? “These developments, in my opinion, will definitely drive adoption,” Zamyatin told Cointelegraph. “DeFi builders are in the spotlight now, and it will be up to us to onboard non-crypto users and to showcase the positive​ potential of a decentralized financial system.”

Giaglis told Cointelegraph: “DeFi is today where Bitcoin was in 2013 or 2015: a few early adopters are seeing the potential, while the mass market has yet to realize how disruptive this will be to traditional finance.” He agreed that last week’s events would probably accelerate acceptance.

“Americans learned the limits of their market structure,” added Sokolin. “It’s not that Robinhood removed the button. It’s that they have to clear with the Depository Trust & Clearing Corporation, and trades take T+2 [trade date plus two days] to settle, and volatility forced their collateral requirements to go up 10 times.” DeFi’s programmatic markets presumably would have escaped this fate because they are transacted in real-time and open 24 hours, seven days a week.

Can DEXs handle the flow?

Are decentralized exchanges even ready for mass markets? Could they handle the volume of last week’s r/Wallstreetbets’ action without crashing? “Today these decentralized markets are still small and not always enterprise-grade,” Burchardi told Cointelegraph, adding: “They would have big challenges to handle these volumes — at least in their current versions.”

Moreover, decentralized exchanges aren’t even wholly decentralized and could be subject to manipulation, noted Zamyatin in a recent blog post. A DEX’s administrative account could upgrade contracts or halt operations, which means “our [proverbial] hedge fund need only get in touch with the person/group in control of this account, apply some pressure or offer a lucrative bribe — and trading can at least be slowed down.”

Nor is Ethereum, the platform that hosts most DeFi projects, completely decentralized. Three mining pools control more than 50% of Ethereum’s hash rate, noted Zamyatin, and “we don’t really know who controls these pools in the background” if they were to collude. “We’re still not quite there from a technical perspective, and market manipulation is still possible — yet arguably, it is more difficult than on centralized platforms,” Zamyatin told Cointelegraph.

Furthermore, since Ethereum houses most of the DeFi projects on the network, as demand for transactions rises, so do the gas fees, and at some point, they may become too expensive, very quickly.

Maybe last week’s events will be viewed one day as DeFi’s Boston Tea Party moment when American colonists disguised as Mohawk Indians dumped 342 chests of tea into Boston Harbor to protest British rule — a seemingly irrational act, but one seen now as a precursor to the American Revolution.

“We will remember this as another instance of short-term mass hysteria and FOMO dynamics that propelled some assets to valuations that had nothing to do with their underlying fundamental values before reverting to fairer prices,” observed Giaglis, adding:

“We are undoubtedly entering an era where more and more people realize the potential of decentralized, peer-to-peer, disintermediated and censorship-resistant applications, especially in the financial services industry.”

Burchardi agreed that a significant movement toward decentralized finance was now underway but added that two key points still needed to be resolved to ensure future growth: “How can you make DeFi more convenient? And when and how does it get regulated? The answers to these questions will determine how DeFi progresses.”

All in all, last week’s event may have split the crypto community, with no clear generational or retailer/institutional clarity, but it arguably alerted the greater investing public to some of the flaws of the current system — a sort of “teaching moment” for decentralized finance, as it were.

In any case, it behooves the blockchain and crypto community to make sure its technologies, security and protocols are in order for the day when the larger public rushes in to use its markets.