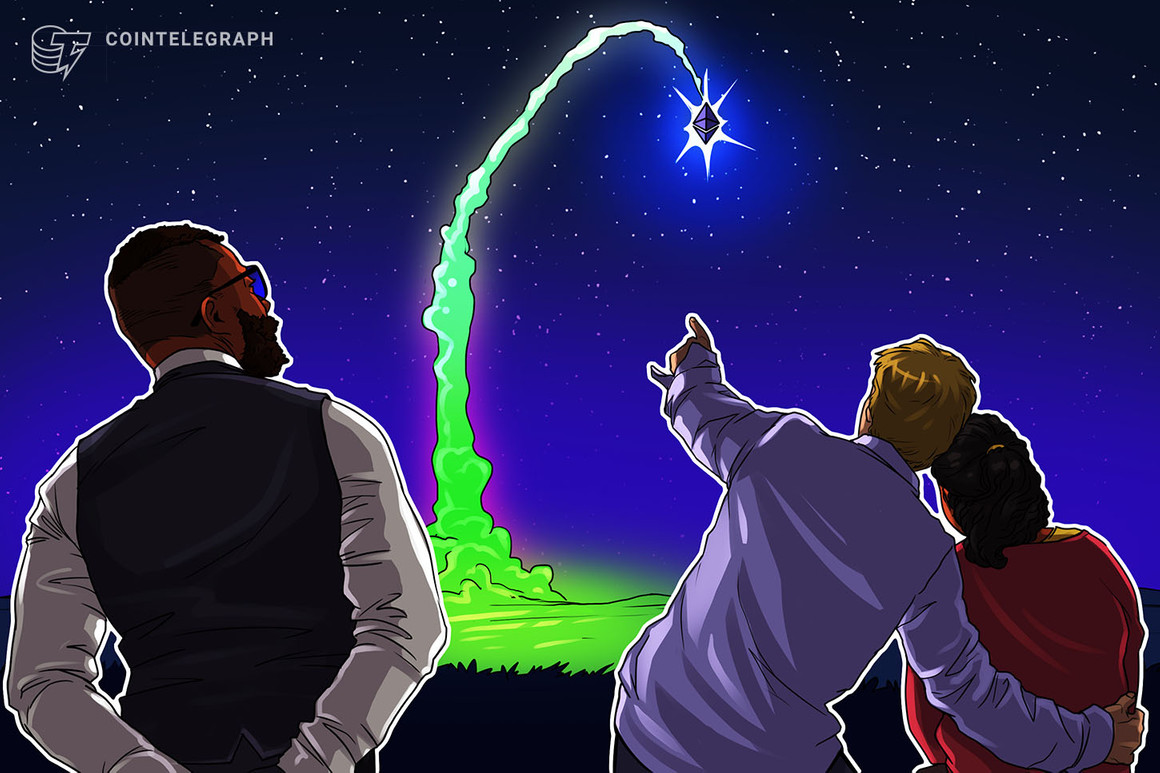 Ether hit its all-time high again on Feb. 2, reaching the psychological mark of $1,500. Since then, its price has remained above this level and is currently sitting at around the $1,700 mark. Along with Bitcoin (BTC) and other cryptocurrencies, Ether (ETH) has seen outstanding price action since the start of 2021, having surged by 10.46% in a month.

While Bitcoin has also been seeing positive price action, it is shy of its previous all-time high of $41,941 reached on Jan. 8. Ether volumes have been on the rise. According to market data provider CryptoCompare, spot volumes reached their all-time high on Jan. 11, with volumes for the month being up by 320% from December 2020.

Alongside increasing volumes, data from analytics firm CryptoQuant shows that the amount of Ether held on centralized exchanges has been declining to new lows, signaling increased buying pressure for ETH.

Exchange outflows have also been increasing, which shows that buyers are interested in holding the asset rather than selling. Ki Young Ju, CEO of crypto data analytics firm CryptoQuant, told Cointelegraph: “Since ETH reserves on all exchanges keep decreasing, I think the bull run will continue until it stops decreasing.”

Derivatives data also shows a bullish outlook for Ether, as according to data analytics platform Laevitas, 80% of options volume on Deribit was dominated by calls (buy orders) on Feb. 2 when ETH reached its all-time high of around $1,500 — a bullish sign.

According to Ben Zhou, CEO of Bybit exchange, Ether is catching up to Bitcoin in terms of demand and trading volume. He told Cointelegraph: “In the past couple of days the volumes of our ETH/USD and ETH/USDT pairs are not too far off from their BTC counterparts.”

Ether has been doing well both in the retail and institutional worlds, with demand for Ether increasing rapidly. While Grayscale, the world’s biggest cryptocurrency asset manager, previously closed off several altcoin trusts, including the Ethereum Trust, investments resumed in early January, and it currently has $4.25 billion worth of ETH under its management at the time of writing, an increase of over 240% in the last three months. Jonathan Hobbs, the author of The Crypto Portfolio and a former digital asset fund manager, told Cointelegraph:

“We have seen a general rotation in the crypto market into altcoins, while Bitcoin has been in a range. Ethereum is a proxy for the altcoin market that institutions can access through Grayscale’s trust. With a market cap of nearly $200 billion, Ethereum is large enough for institutions to start taking seriously.”

As interest for Ether continues to increase, so do the options for institutional engagement. On Feb. 8, Ether futures will be added to the Chicago Mercantile Exchange alongside Bitcoin. Hobbs added: “CME futures trading will provide a further stamp of approval for institutions. I would expect Ethereum to rally leading up to the event on the eighth of February. But I would be cautious of a pullback around or just after the launch.”

Activity on Ethereum, DeFi and NFTs

The growing demand from both the retail and institutional crowds can be attributed to the growing activity and hype surrounding the decentralized finance sector. The total value locked in DeFi has also been increasing and is currently sitting at almost $35 billion, according to DeFi Pulse, an all-time high.

The trading volume on decentralized exchanges has also been increasing steadily. According to analytics tool DeFi prime, DEXs had over $55 billion worth of trading volume during January, a record-breaking month. Several DeFi tokens have also reached their all-time highs in recent times, including Aave, Uniswap and SushiSwap.

While nonfungible tokens still lag behind in terms of activity and volumes, the sector has been heating up, especially in the gaming and art worlds. Just recently, Hashmasks, an NFT-based project, was able to sell over 7,600 ETH (roughly $10 million at the time) worth of NFT tokens representing collectible cards.

As Ether continues to rally, other altcoins have also seen significant price action. However, many are still far from their old all-time highs, including Ether competitors, such as EOS. These layer-one blockchain projects have been losing ground to Ethereum, with a recent report by venture capital firm Outlier Ventures showing that many Ethereum competitors are seeing a decline in development activity. Ilya Abugov, advisor at DApp statistics aggregator DAppRadar, told Cointelegraph:

“As the Ethereum ecosystem grows, it becomes more attractive to integrate with it. The composability factor increases with the growing number of DApps, and the amount of capital and the number of active developers make it very appealing to other teams. You can even see it in the number of different wrapped tokens coming to Ethereum.”

Furthermore, as development on Ethereum 2.0 continues to bear fruit along with other layer-two solutions, which are currently available, Ethereum remains a viable candidate for a long-term investment. These solutions will allow it to scale as a network and blockchain, especially with the introduction of staking, which will replace the old proof-of-work model.

Staking will allow Ether holders to earn interest on the ETH they stake. At the time of writing, more than 2.9 million ETH, worth over $.4.7 billion, have been staked on the Ethereum Beacon Chain, with APY staking rewards reaching double-digit percentages. While PoW miners have had a record-breaking month in terms of revenue, earning over $800 million in mined coins globally, it seems that staking is becoming increasingly popular.

With more coins having being locked away for staking, the available supply of ETH is significantly reduced, which may have a positive impact on the price. According to Zhou, a combination of all these factors spell a bright future for Ethereum in the short and long term: “The growing value staked on Eth2 and locked in DeFi, the increasing user activity, and the resumption of Greyscale Ethereum Trust have compounded to lift Ether to ever new heights. And unlike the 2017–18 bull run, this time, Ether is a lot more sure-footed.”

Some note that when Ether pumps, so do other altcoins. If so, then Ether’s bull rally may have a network effect throughout all of the cryptosphere, especially for projects hosted on its blockchain. Nevertheless, Abugov expects some coins to fall behind: “Blockchains that have not been able to foster an ecosystem will find it hard to maintain developer communities simply because the upside for those teams will be much lower on those smaller networks.”