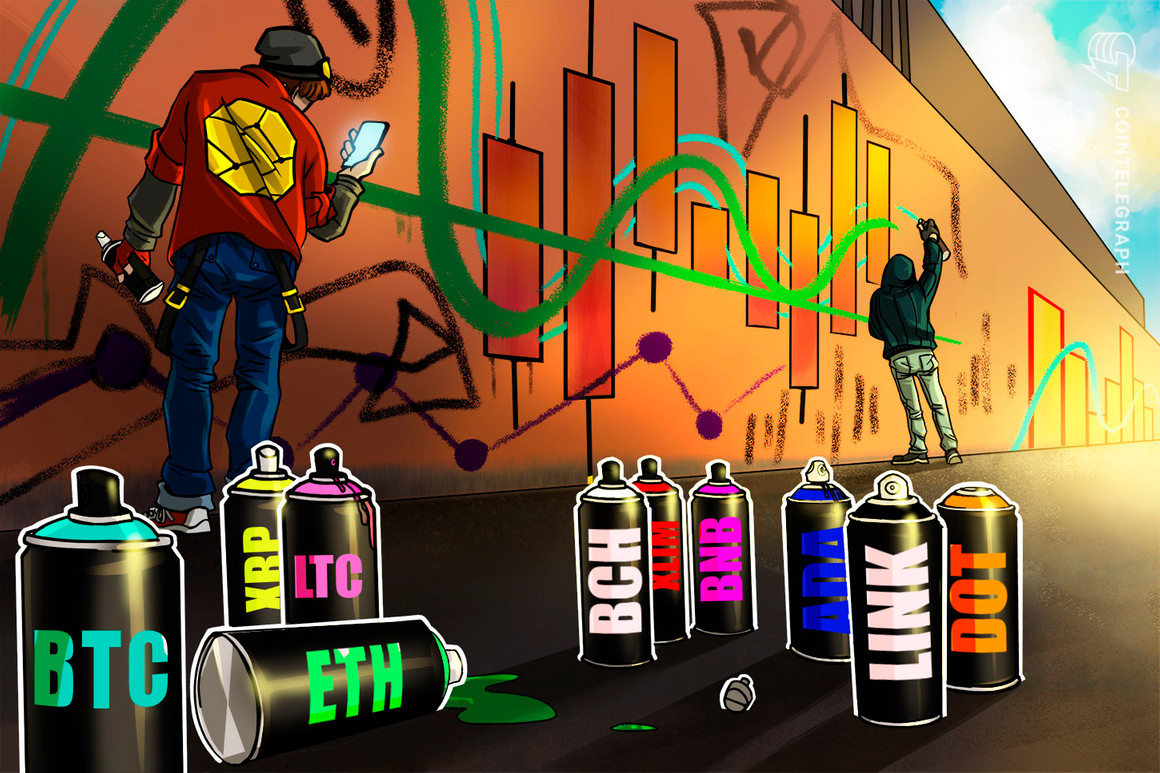 The U.S. bond yields have softened and this has ignited investor’s appetite for risk-on assets. After a negative closing last week, the S&P 500 has started the current week on a positive note. Thi bullish sentiment has also rubbed on to the crypto sector, which is surging higher, led by Bitcoin (BTC).

After Tesla and Mastercard’s foray into Bitcoin, analysts at Citigroup believe that Bitcoin is at a “tipping point,” which could either take it mainstream and make it the preferred currency for world trade or result in a “speculative implosion.”

Citi’s analysts expect the central bank digital currencies and the fiat-pegged stablecoins to be positive for Bitcoin’s adoption.

While several investors have been worrying about a deeper correction in Bitcoin, MicroStrategy CEO Michael Saylor seems unfazed. Saylor announced that MicroStrategy added another $15 million worth of Bitcoin to its purse, taking its total holding to 90,859 coins which were purchased at an average price of $24,063 per coin.

However, not everyone is bullish on Bitcoin. ‘Big Short’ investor Michael Burry believes that Bitcoin is in a speculative bubble at the current levels and may witness a sharp fall that “will be dramatic and painful.”

Let’s analyze the charts of the top-10 cryptocurrencies to determine whether the uptrend has resumed or if the current up-move is only a dead cat bounce.

Bitcoin dipped to an intraday low at $43,006.77 on Feb. 28 and the long tail on the day’s candlestick suggests the bulls used the fall to accumulate at lower levels. The buyers are currently trying to sustain the price above the 20-day exponential moving average ($47,711).

If they succeed, the BTC/USD pair could be on target to rally to $52,000. The bears are again likely to mount a stiff resistance at this level. If the price turns down from this resistance, the pair could consolidate between $43,000 and $52,000 for the next few days.

The flat moving averages and the relative strength index (RSI) above 55 also point to a possible range-bound action in the near term.

However, if the bullish momentum picks up and the buyers push the price above $52,000, a retest of the all-time high at $58,341.03 is possible. This bullish view will invalidate if the pair turns down and breaks below the 50-day simple moving average ($41,313). Such a move could signal the start of a deeper correction to $28,850.

Ether’s (ETH) slide below the moving averages shows that it is in a corrective phase. But the long tail on the Feb. 28 candlestick shows that the bulls are attempting to defend the 38.2% Fibonacci retracement level at $1,413.

The bulls are currently attempting to build up on the recovery and sustain the price above the 50-day SMA ($1,509). If they succeed, the next stop is likely to be the 20-day EMA ($1,624), which is likely to act as a stiff hurdle.

In a correction, the bears try to sell on relief rallies to the 20-day EMA. If the ETH/USD pair turns down from the 20-day EMA, it will suggest a negative sentiment. The bears will then try to sink the price below $1,289. If they succeed, the decline could extend to the 61.8% retracement level at $1,026.

Contrary to this assumption, if the bulls can propel and sustain the price above the 20-day EMA, the pair may retest the all-time high at $2,049.

The long wick on the Feb. 27 candlestick shows profit-booking near the psychological resistance at $1.50. However, the long tail on Cardano’s (ADA) Feb. 28 candlestick suggests that bulls continue to accumulate at lower levels.

Although rising moving averages are a bullish sign, the negative divergence on the RSI indicates that the momentum may be weakening.

If the bears sink the price below $1.55, the ADA/USD pair could drop to the 20-day EMA ($1.02). This is an important support to watch out for because a rebound off it will suggest that traders continue to accumulate on dips.

A breakout of the $1.50 resistance could start the next leg of the uptrend that may reach $1.83 and then $2. This bullish view will invalidate if the pair breaks below $0.98.

The rising moving averages and the RSI above 61 suggest that bulls have the upper hand. The first target on the upside is $281 and if that is crossed, the BNB/USD pair may rally to $309.4995.

Contrary to this assumption, if the price fails to sustain above the downtrend line, it will suggest that traders who are stuck at higher levels are bailing out of their positions. The trend will signal a deeper correction if the price turns down and breaks below the 20-day EMA.

In an uptrend, traders buy the dips to the 20-day EMA as it offers a low-risk entry opportunity. Therefore, Polkadot’s (DOT) current bounce off the 20-day EMA ($31) suggests the uptrend remains intact.

Both moving averages are sloping up and the RSI is above 64, indicating the path of least resistance is to the upside. If the bulls can drive the price above $35.6618, the DOT/USD pair may rally to $42.2848.

This bullish view may invalidate if the price turns down from the overhead resistance and breaks below the 20-day EMA. Such a move will suggest that traders are using the relief rallies to lighten up their long positions.

The bulls are attempting to defend the 50-day SMA ($0.40). If the current bounce sustains, the buyers will try to push XRP above $0.50. If that happens, the altcoin could start its journey to $0.65.

However, the bulls are unlikely to have it easy because the downsloping 20-day EMA ($0.472) and the RSI below 50 suggest that bears have the upper hand.

If the price turns down from the current levels or the overhead resistance at the 20-day EMA, the bears will try to sink the price below the 50-day SMA. If they succeed, the XRP/USD pair may drop to $0.359. A break below this support could start a sharper decline to $0.25.

Litecoin (LTC) broke below the 50-day SMA ($166) and dipped to the uptrend line on Feb. 28, but the long tail on the day’s candlestick shows strong buying at lower levels. The bulls are currently trying to push the price towards the $185.58 overhead resistance.

They are likely to meet stiff resistance from the bears at the 20-day EMA ($186). If the price turns down from this resistance, the bears will make one more attempt to sink the LTC/USD pair below the uptrend line. If they can manage to do that, a drop to $120 is likely.

The bulls are trying to stall the correction at the 50-day SMA ($25.26). Although the price dipped below the 50-day SMA on Feb. 28, the long tail on the candlestick suggests buying at lower levels. Chainlink (LINK) is currently attempting to start a relief rally.

On the contrary, if the price turns down from the overhead resistance, the bears will try to sink and sustain the pair below the 50-day SMA. If that happens, a drop to $20.11 is possible.

Stellar Lumens (XLM) broke above the 20-day EMA ($0.428) on Feb. 27, but the bulls could not push the price above the resistance line of the descending channel. This suggests that demand dries up at higher levels.

However, the positive sign is that the bulls have successfully defended the 50-day SMA ($0.369) on Feb. 28. If the XLM/USD pair rises above the 20-day EMA, the bulls will make one more attempt to drive the price above the channel. If they succeed, the pair could rally to $0.50.

On the other hand, if the price turns down from the 20-day EMA, the pair may again drop to the 50-day SMA. The flat moving averages and the RSI near the midpoint suggest a few days of range-bound action.

Bitcoin Cash (BCH) broke below the uptrend line on Feb. 28, but the bulls purchased the dip as seen from the long tail on the day’s candlestick. If the current rebound sustains, the bulls will try to start a relief rally that may reach the 20-day EMA ($551).

The bears are likely to defend the 20-day EMA and if the price turns down from this resistance, it will suggest that the sentiment remains negative. A break below the uptrend line could result in a fall to $370.

Both moving averages have started to turn down and the RSI is in the negative territory, indicating advantage to the bears. However, if the bulls can push and sustain the price above the 20-day EMA, the BCH/USD pair could rise to $631.71.